The World Class Great Western Greenway is a 42km traffic free cycling and walking facility which primarily follows the line of the famous Westport to Achill Railway, which closed in 1937.

It’s development has been made possible by agreement of local landowners who have allowed permissive access to users to pass through their lands.

A European Destination of Excellence

On the 8th July 2011 the Newport to Mulranny route along with the regenerated railway heritage of Mulranny was awarded the ‘European Destination of Excellence‘ EDEN    The route offers gentle gradients and some of the most idyllic scenery in the west of Ireland, travelling through woodlands, across rolling hills and over and under original hand cut stone railway bridges. There are breathtaking views of the Nephin Beg Range to the immediate north and views of Clew Bay and Croagh Patrick to the south. The route forms part of the National Cycle network and it is the longest off road cycling experience in the Country. It is an exhilarating and safe experience for all the family.

On the 29th July 2011 the final two sections of the Greenway, Mulranny to Achill Island and Westport to Newport route was completed and officially opened by An Taoiseach Enda Kenny.

Why not experience spectacular views of Clew Bay, travel through woodlands , across rolling hills and over and under original hand cut stone railway bridges from the railway line dating from the late 1800’s.

If you have already enjoyed the Great Western Greenway we would be delighted if you could please take a few minutes to fill out the attached survey.  Click on the following link http://surveymonkey.com/s/mayogreenway 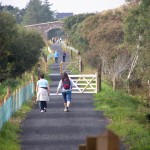 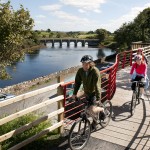 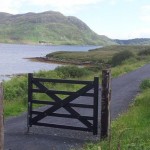 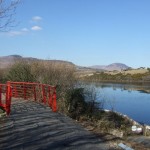 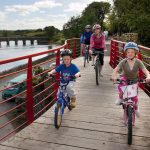 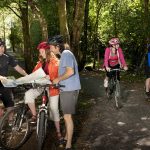